We’re just a few days away from the new year so I thought I’d do my not-so-annual recap (generally done when WordPress prompts me with stats, which they did not do this year).

First, here is the Mann family annual Christmas/New Year video. We’ve got a couple of…guests with us this year…enjoy.

I did a host of comic conventions this year, that started with the very local (to me) Florida Pop Con. The show was poorly attended, but I saw old friends and made some new ones there. In March I did the one day Infinity Convention, near UCF and a had a great time. I was also a speaker/guest at the Coral Springs Literary Festival, a change of pace from the usual comic shows, and something I don’t do as much of since coming to Full Sail in 2011. I did one day at the always awesome Daytona Comic Con in April, and then did FCBD in May at ACME. I traveled up to Pikeville Comic Con in August with my comic-making traveling buddies Jeff Whiting, Barry Gregory, and Thomas Florimonte. The last part of the year felt busy as Jeff and I made road trips to ComiConway (an awesome convention!) and Memphis Comic and Fantasy Convention in November, and then Nashville Comic and Horror Convention in December. I’ll talk about 2019 shows next week.

The day gig at Full Sail clipped right along. I’m sometimes surprised that I can work in the conventions above because work can often be a bit overwhelming. This year, I had adjunct classes from about February (or March?) on. What that means is that I had extra classes every month (and more grading). I got a new boss this year, too. The old boss is still there and rocking, but Full Sail inserted a position in between me and the old boss, making me two steps from her instead of one. It’s going well with him so far—he kept me around after my last annual review in October.

A highlight for the year was the successful launch, funding, and shipping of the new Cat & Mouse #1 comic. I worked with a great team of artists to get it done: Dean Zachary, Barb Kaalberg, and Kevin Gallegly. We’re waiting on Dean for #2, but we’re ready to go.

Family wise: BJ continued to work on and grow Dr. Mom Knows Best. If you’re into trying to live healthy and get the pharmaceuticals out of your life (and system!), you should check out her page. We’ve pretty much gotten rid of all over the counter medicines—about 95%.

My youngest, Brett, graduated from high school and is trying to figure out life. My oldest, Brittany, is still trying to make her way out in LaLa land (if you have something she can audition for, call her!). They both have added special someones to their lives.

Late in the year I had a health scare: seems my BP was high. Working on getting it down naturally, but taking BP meds for now and it brought it down to a manageable level. I didn’t realize there was a “get-to-the-emergency-room-NOW” high level until it happened to me. And no, I didn’t FEEL bad at all.

Hey all my NE Arkansas friends, family, and fans! I’ll be appearing as a COMIC GUEST at the Friendly Neighborhood Comic Expo this Saturday and Sunday in Paragould, Arkansas. It has the longest show hours of any show I’ve ever been to: Saturday is listed as 9am to 9pm and then Sunday from 9am until 7pm. 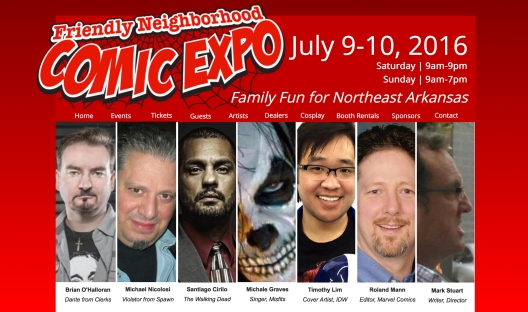 On Sunday, I’ll have my very own Q&A, which starts at 12pm—that’s noon for those of you who (like me), have a hard time remembering exactly if 12pm is noon or midnight. It’s noon, so show up and ask me some fun questions about working in comics as a writer or an editor…or about my cool day job teaching comic writing these days at Full Sail University!

This will be about my fourth time to appear as a guest at a show in the state of Arkansas, but only the second time as a “comic” guest and certainly the first in this part of the state. The first time I was a comic guest in the great state of Arkansas was in either 1999 or 2000 and was in Little Rock. I think the name of the show was “RockCon,” but I can’t find my notes from then, so I’m not sure. I DO remember that whoever it was putting on the show, treated me well.

The next time I was a guest was in 2010, and I was the Keynote Speaker at the Arkansas Writers Conference in Little Rock. My invite there, of course, was thanks to the writing retreats I’d done at the Hemingway Writers Retreats at the Hemingway-Pfieffer Museum and Education Center in Piggott, Arkansas. You can read about my fun experience as Keynote Speaker here: https://rolandmann.wordpress.com/2010/06/08/at-the-arkansas-writers’-conference/

I returned to Arkansas as an author guest in February of 2011 at Ozarks University in Clarksdale. Regrettably, it snowed that weekend and very few people attended the actual show. However, I still had a great time because I got to meet new people and make new writerly/artist friends.

So I’m very much looking forward to being a comic guest in Paragould. I’ve got a lot of family and friends in the surrounding area—my cousin (first cousin, for those of you keeping score), Dr. Kevin Mann is even a dentist in the area—so I’m hoping to see many of them during the two days.

As a diehard Razorback fan, I’d really like to be invited to do more comic shows in this state–hint hint to all you comic show coordinators!

See you Saturday and/or Sunday! Bring some stuff for me to sign, or pick something up from me there!

Hi blog. Did you miss me? I missed me.

Seriously, though. Things have been a mess time wise, but I hope think they’re cooling down. I know, don’t get my hopes up because the holidays are right around the corner, right? Sigh.

My classes have been full, but I’ve made some cuts to the graded work and have actually gotten some help—so that is good. I still enjoy the heck out of the campus classes—I mean, what’s not to love about teaching comic writing, right? 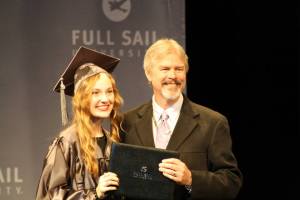 In other big news, Brittany graduated from Full Sail–and she was the Valedictorian of her class! That’s right. Tis true. And she is anxious as everything to get to work! I’m pretty anxious for that to happen, too! Ha! The cool news is that in just the last few months she was cast in major roles for two independent films. She was the lead in Love Waits and is the co-lead in The Colors of Emily (she plays Emily). She’s slated for another big role in March, and The Colors of Emily is actually a trilogy and so she’s booked for both of those in the future. All in all, fantastic success out of the gate!

As you can see from the picture, Mom, Dad and Ang were able to come down for not only Brittany’s graduation, but for Thanksgiving. We had a great time, but man did it go by in a hurry. Brittany wanted to go to Hard Rock Café to celebrate…so we lost our hearing while we were there. I think we sat in the loudest spot in the place.

Brett marched for the last time, as well, and was pretty bummed about it. They put on a pretty cool end of semester show that wasn’t just the 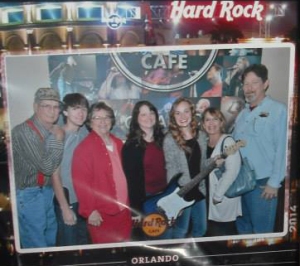 band, but kind of an all-around “talent show.” We snagged the family picture one of those nights goofing around. The show was really very cool.

Cat & Mouse is in the hands of a couple of publishers now so it’s just playing the waiting game. I think it has a better shot with one more than the other…but my contacts are better at the other one.

An independent publisher is looking hard at trying to make The Gifted happen as a series of graphic novels. As an indy publisher, but biggest obstacle to getting a graphic novel done is the art. Even if it doesn’t happen, I’m thankful they are making the effort. I’ll talk about that more when I can, of course.

Nothing new on Beah, Citizens or Rejects, but you’ll be the first to know.

I’m also hopeful that I’ll get Buying Time on Amazon and Kindle within the week—hopefully before Christmas.

Okay…hopefully I don’t crash and burn before next week! See you then! 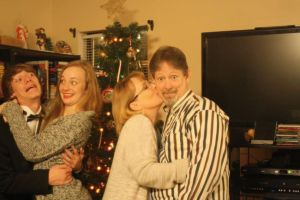