Did you miss me? I missed me. As I tell my students and writers conference attendees, there’s no real good reason for not writing. And while I don’t really consider this blog my “writing,” it is part of my writing process, something which helps keep my creative juices going.

But it seems one thing or another has kept me from writing here. One of those things, I think, was wrapping up the Kickstarter segments. For pure transparency, I was a bit bummed we didn’t make it…and then afterwards, Joe had to move on to other projects, which effectively kills Citizens as is. That said, I DO have good news on other projects fronts, and I hope to be talking about two of them very soon!

But even though I finished the posts, I wanted to actually reflect a little on the campaign.

One of the telling things about running a Kickstarter campaign is that it becomes very clear where the “support” comes from. While you can get anonymous donors (I had a couple), most support and then get on board to help the campaigners get the word out. The supporters of Citizens did just that. There were some who I felt went above and beyond trying to help me and Joe make our goal—I saw multiple posts from them telling people to go check it out. Of course, I’m incredibly thankful for those people!

I think the biggest surprise to me from the entire thing was the overwhelming lack of support from the Christian community. Most of you here know that about me. I don’t blog a lot about my faith…I try to live it more than talk about it—though sometimes I do. Of course, you know too, that I fail a lot on “being” a Christian. I guess that’s just part of my path. But after my “religious conversion,” I tried to immerse myself in the “Christian creative community.” As a new believer, I wanted to be a part of it. I bought books, comics, movies, and music that I didn’t know existed. Most of it really bad, but I wanted to support it so that I could see it improve. Sad to learn it’s a one way street.

Will I do another kickstarter? Yeah, I’m pretty sure I will. In fact, I’m already thinking of them. One KEY factor is that the art is going to have to be mostly done so that the delivery date is closer. That, and I’m going to push harder for earlier pledges. So if you pledged to Citizens, I’ll be coming to you again asking you to support the next one. If the project looks interesting to you, I’ll ask that you pledge early–because it helps generate heat on the KS campaign.

Okay…now back to writing…and grading. Lots of grading.

I’ve just come off of two back to back Wizard World Comic Cons (Nashville and Ft. Lauderdale) and am still battling some sort of Con Crud. Ugh. No fevers, just sore throat and coughing. Seems to be far worse in the a.m.

Wizard World Comic Con in Ft. Lauderdale was fun…but seemed to be light on attendees; not much foot traffic. Not sure if there was something else competing for folks or not. The Wizard crew was as efficient as ever and I got to chat with some cool folks including attempting to start some “charge for autograph” trouble with Neal Adams…but he didn’t take the bait! Haha Shared my spot (and hotel room) with the talented Joe Badon and had a blast doing so! Also got to meet Joel Adams in the flesh–I worked with him VERY briefly back during my Marvel/Ultraverse days.

But figured I’d get back to the Kickstarter thread and finish it up. The nervous feeling never went away, not during the entire process. I always felt like I wasn’t doing enough, even though I was emailing folks, posting updates to social media, getting on podcasts, etc. But that’s exactly what I did after finishing up the video—hit “launch” and I began to send out emails and contact bloggers and podcasters to see if they were interested in featuring the book.

Now that the campaign is over, I think I probably started contacting the bloggers and podcasters too late. I think the emails were fine because most of those were very personal and I didn’t really want to suddenly become a spammer with “I’m ABOUT to launch” one…followed by the “I’ve launched so please go support.” I dunno, maybe I should have. KS tells you that the most successful campaigns are those that reach 30% or greater during the first few days. We only reached about 20%.

No one pledged for the original art from Kyle Hotz or Joie Simmons, either, which surprised me. I think, though, that maybe not HAVING the art hurt. When I try one again, I’ll be sure to try to get the art.

In the end, we quoted too high a print run and for too many prints. Very few folks actually pledged to get the prints—which is news to be as I thought those would be popular, particularly based on what seems to be popular at the comic shows. I probably should have build the campaign around a much smaller print run (100 vs 500) and knocked out the prints…or reduced them.

I’m not done with Kickstarter, though, as I think it is a good tool for creators. Not sure what project will be next, but I’m actually kind of anxious for it. Citizens won’t be immediately relaunched as Joe has personal projects to attend to…so not sure what the future holds for the book. I really wanted it to be a full length graphic novel and not a shorter work…but that might not be in the works for it.

Okay, this is a little shorter than normal because I’m headed back to bed (writing this in the pm hours). Thanks for reading, y’all!

Well, those of you who are regular here know this has been a hectic month for me. The sad news is that the Kickstarter to get Citizens off the ground was unsuccessful. I’ll talk about that some when I wrap up the whole Kickstarter blog entries. But—if you really know me you know that not all hope is lost. In fact, I talk with the uber-talented Joe Badon (artist for Citizens, if you weren’t paying attention) this coming weekend about what our next move is. I definitely want to see it happen, but as a writer in a very visual medium, much of it will depend on Joe’s interest level. I’ll have more to say about that next week.

More urgently, I’ll be at Wizard World in Ft. Lauderdale this weekend. You can find me (and Joe, too!) at D28 in Artists Alley. Come by and say hello, by some cool comics from us. We’ll even sign them! I’ll even sign them for FREE! (if you don’t get the humor in that, ask me at the show and I’ll explain it to you) 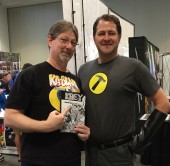 I had a great time at Wizard World in Nashville last weekend. Daughter Brittany was able to attend with me and we were hosted by the very gracious Kyle Saylors, who was wrapped up in a music video shoot when we arrived. Kinda cool!

I got to see some old pals: chatted with Howard Chaykin and picked up almost like it was just a few months since I’d last seen him. Danny Fingeroth invited me to participate in a few panels—and much fun was had. Got to see Ronnie Prudhomme, who was about 16 the first time I ever met him: wish I could dig up the picture of me, Steven Butler, Mitch Byrd and Thomas Florimonte at his dad’s store: Paper Gold.

Books by Sara Woolley and Myke!

I also got to meet some new folks: I was able to pick up some cool swag from Sara Woolley and Myke! (see the pic) Sara was my neighbor in Artists Alley and we were on one panel together (Writing Comics).

And, of course, it wouldn’t be a comic convention without some cool cosplay folks. You should note they proudly support my work—so you should, too!

(FYI, you can always click on the images to see them in a larger size)