Yep, you read that correctly. Cat & Mouse #1 has a kickstarter running…and I’m asking you to go check it out. Wait…you thought C&M #1 was published in 1989 by EFGraphics…and then in 1990 by Malibu’s Aircel. It was.

A brief history for those interested: When I was at the University of Southern Mississippi in the middle 80s, I met Steven Butler, who became a lifelong friend. Steven was a super-talented artist and he and I swapped notes of rejection from assorted comic companies. He was trying to get work as an artist, me as a writer. So we decided to work together and do our own thing.

One of Steven’s roommates was the equally talented Mitch Byrd, and Steven recruited him (My other pals, Barry Gregory and Thomas Fortenberry were involved on the writing side). In trying to figure out what projects to do, Mitch had a four page piece he had penciled and Steven had inked. It was a crime/cop thing that featured a shadowy figure shoot at cat burglars as they leaped out of a window. I took that and used it as a springboard to come up with the story for the first issue of C&M, with some serious input from both Steven and Mitch. If you’ve read it, you know that I included a character by the name of Demon, a character who’d been with me in one form or another, since about 6th grade.

Cat & Mouse ran for 18 issues once it found a home at Malibu. Mitch and I did a four issue Miss Fury mini-series after, but then we both went on to different projects (Mitch landed some nice work with DC comics, and I became an editor at Malibu).

Until today. Actually, until about two years ago with another supremely talented artist asked me about it. Enter: Dean Zachary.

But because it’d been so many years, it didn’t make sense to me to just bring back the same characters from before (there’s some other stuff, too)…so the characters from Volume 2 are completely new characters with completely new backgrounds, etc. The spirit and mood and tone will all remain—and we’ll even get to see some of the supporting cast from volume 1, but there are a lot of new faces involved—which makes it very exciting.

Volume 1 began mostly about fighting corruption in the justice system. Volume 2 will deal with the very serious theme of human trafficking. It will remain a “General Audiences” book, but the theme will be a little heavier.

SO…yes, this is me asking. Please go check out the link and consider pledging—I really think you’ll like what you read. But if you can’t pledge, please consider sharing it to those in your social network—tell them you know me and you think they should plop down a few dollars to help us get #2 made!

Cat & Mouse #1 kickstarter slated for May 1

I’m super-excited to announce to you that May 1 is our target launch date for the kickstarter campaign for Cat & Mouse #1. I know we’ve been teasing it for a while, but we’re finally there.

I won’t talk long here, but don’t be surprised if over the course of the next few weeks, you see images with our announcement. I can tell you this, though: the campaign will feature the comic, of course, and it will have a KICKSTARTER ONLY wraparound cover! Unlike some other comic campaigns I’ve seen, this is the ONLY way you’ll be able to get the comic with this cover. Oh, you’ll still be able to get the comic, just not the KS wraparound version.

Also, I’ve managed to put together a couple of complete sets of volume 1—all 18 issues. I’ve culled back issue boxes and even ordered a handful of them from Mile High to complete a few sets. Full sets are pretty tough to come by…so there will be a few available.

Also, I’ve got about 10 copies left of the very first edition of Cat & Mouse #1. A lot of folks don’t realize that before Malibu’s Aircel picked us up, C&M #1 was printed—on newsprint and in COLOR!—by EFGraphics. EFG also printed Jazz Age Chronicles by Ted Slampyak…but EFG went belly up before they could print C&M #2. Those copies of C&M #1 will be available as a limited pledge reward.

I’ve also been hounding some of my artist pals to do some art for us and I think you’ll be happy at what you see! I won’t mention all of them now, but I’ll mention that the first one to raise his hand and say he’d help is the hot new artist Timothy Lim. You’ve seen his work on Thump: the First Bundred Days, and My Hero Magademia. This will be your chance to get a one of a kind original work from him!

So, mark your calendars!

Last week got away from me and I let it slip by without a blog. Argh. We’re on week 3 of the Tiny Kickstarter is nearly gone leaving us with one week left. A whole bunch of you have pledged your support—and I am incredibly grateful for that. For those of you who haven’t pledged and intend to—stop waiting and get it done now. 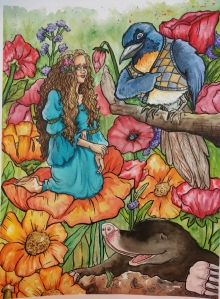 Once it is all said and done, Tiny will be 52 pages of story and art printed in two installments. We’re over halfway done with it all, the first installment is finished! Check out this cool “snow” panel from the second issue! Wow!

For you fans of original art, there are still two pieces available from two fantastic artists (attached to this blog!): both Jim Hall and Jenni Gregory have contributed original art to help us get funds. They are fantastic pieces! Grab one now before they are all gone!

So, we’ve been honored to be featured on some pretty cool podcasts. You should go give them a listen because they were nice enough to have us on.

The Riley and Kimmy show:
http://rileyandkimmyshow.blogspot.com/2016/05/podcast-881-roland-mann-megacon.html

The Worst Comic Podcast Ever (this is the name of the podcast, not anything judgmental from me!)

We’ve got an upcoming session on Wayne’s Comics Podcast, and a live—yes, LIVE—session on Her Dork World/His Dork world. That will be June 23 at midnight! It’ll be just a few days before the Tiny Kickstarter campaign ends, so I’m sure we’ll be giving it a push. You can point your web browsers to vocnation.com on Thursday night to give it a listen. There will be a number you can call in and chat with us, too, ask us some hard questions.

Then, from July 21-24, I’ll be attending San Diego Comic Con for the first time since 1999! I hear it’s changed a lot, but I’m hoping to see many old friends and make new ones…maybe even pitch a comic or two!