Last week got away from me and I let it slip by without a blog. Argh. We’re on week 3 of the Tiny Kickstarter is nearly gone leaving us with one week left. A whole bunch of you have pledged your support—and I am incredibly grateful for that. For those of you who haven’t pledged and intend to—stop waiting and get it done now.

Once it is all said and done, Tiny will be 52 pages of story and art printed in two installments. We’re over halfway done with it all, the first installment is finished! Check out this cool “snow” panel from the second issue! Wow!

For you fans of original art, there are still two pieces available from two fantastic artists (attached to this blog!): both Jim Hall and Jenni Gregory have contributed original art to help us get funds. They are fantastic pieces! Grab one now before they are all gone!

So, we’ve been honored to be featured on some pretty cool podcasts. You should go give them a listen because they were nice enough to have us on.

The Riley and Kimmy show:
http://rileyandkimmyshow.blogspot.com/2016/05/podcast-881-roland-mann-megacon.html 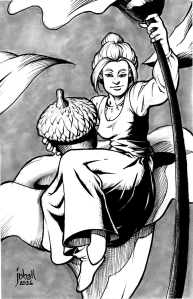 The Worst Comic Podcast Ever (this is the name of the podcast, not anything judgmental from me!)

We’ve got an upcoming session on Wayne’s Comics Podcast, and a live—yes, LIVE—session on Her Dork World/His Dork world. That will be June 23 at midnight! It’ll be just a few days before the Tiny Kickstarter campaign ends, so I’m sure we’ll be giving it a push. You can point your web browsers to vocnation.com on Thursday night to give it a listen. There will be a number you can call in and chat with us, too, ask us some hard questions.

Then, from July 21-24, I’ll be attending San Diego Comic Con for the first time since 1999! I hear it’s changed a lot, but I’m hoping to see many old friends and make new ones…maybe even pitch a comic or two! 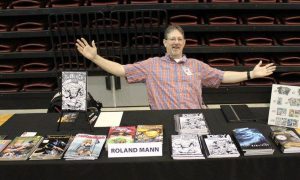 Me at my table!

Last weekend I attended my very first ever comic show in the state of Missouri…and had a blast. Like many shows, the time went by way too fast. Regardless, if you’re in that area, I recommend you make plans now to attend the show next year.

This was the inaugural outing and they’re off to a good start. The dealer’s room was actually a good sized room with lots of variety for fans/geeks of all types. It was a two day show and started at 9 a.m. on Saturday morning. Foot traffic picked up—as is the norm for Saturday shows—around lunch time (folks have to roll out of bed after all). 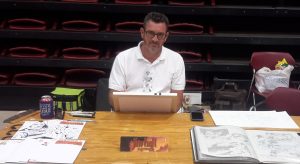 One highlight was that fantastic artist Jim Hall was just beside me. Jim has done a bunch of comics, but I met him way back when he did some pencils for me on The Protectors! I spent considerable time chatting away with him!

Another highlight was getting to see an old pal Chris Wilson! Chris worked at Camelot with me at the MetroCenter Mall in Jackson, Mississippi way back when I was in college. He went on to make a lawyer and now serves the good folk in that area of Missouri! I was incredibly flattered to learn that Chris had somewhat followed my comic career. Had a great time catching up with him!

I also got to meet actor Felix Silla, who—among other roles, played Cousin It in the Addams Family. What a nice—and funny guy he is!

Me chatting with Jerry from Worst Comics Podcast Ever.

I would encourage artists in that area to reach out to Will Peden, who runs Lebanon Mega Con, and let him know of your interest in next year’s show. Will—and his staff—truly take care of their guests! (Thanks to Andi for shuttling me back and forth to the airport!)

Free Comic Book Day is tomorrow! Saturday, May 7! Get to your local comic shop (LCS) and grab you some free comics! You’ll find most shops will have one or two comic creators there to talk to you about comics, sign autographs, and general spread the comic gospel.

I will be appearing for the first time ever at Gods & Monsters in Orlando, Florida. They’re located in the Artegon Mall just off International drive. I’ll be there with my comic making pals Barry Gregory, Jenni Gregory, Thomas Florimonte and Rene Florimonte…as well as some others. Come out and grab some free comics and say hi to us!