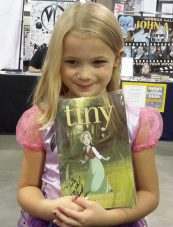 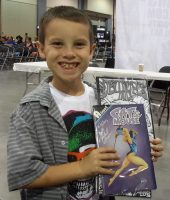 I meant to do this last week, but didn’t get around to finishing it—started it, just didn’t finish it. Had a great time, though, at the Richmond Wizard World.

I traveled to Richmond with daughter, Brittany…via motor vehicle. Yes, all ten and a half hours!

Quite the drive. We arrived just in time to not be able to unload at the loading dock! So we had to hoof it all the way from the parking deck pulling my convention set-up. Friday was an incredibly dead day. Not sure exactly why, could have been “the races.” I have no idea what those were, but when we checked in to the hotel they asked if we were here for “the races.” I assured them I had no idea what that was and was there for the comic show.

Saturday was better, but only after Gene Simmons stopped talking. The doors opened at 9am, but nobody—and I mean NOBODY hit the floor until shortly after 9:30, which is when Gene stopped answering questions. After that, though, Saturday turned into a fun day with a lot of traffic. This time, I was able to snap some photos of some proud new owners of assorted works of mine (see all the photos attached!).

I’m hopeful—as I asked them all to do so—they’ll drop me a line to let me know what they think.

I was next to Jose Delbo, too, and it was nice to chat with him and his family. I’d never met him before and aside from being talented, he was incredibly nice!

Me and Danny Fingeroth!

I sat in on a fun panel moderated by Danny Fingeroth about comic writing. Also on the panel were Gary Cohn, Victor Dandridge and Michael Lent. (wish I had a picture of that, but I don’t…sorry) Danny always puts on fun panels and so I’m glad he continues to ask me to participate.

I got to meet Sam Jones, who most of you will know as Flash Gordon from the 1980s sci-fi piece Flash Gordon, complete with soundtrack by Queen. Now, normally I’m not really into the media personalities.

I mean, it’s cool they’re there and all, but there’s pretty much no one I want to meet so desperately that I’d pay $30 for a photo with them. I saw a “break” in the line with Sam Jones, so I really just went up to tell him I appreciate his work on Flash…and the dude ended up being one of the nicest folks ever! 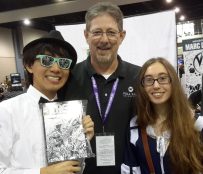 A highlight of the weekend was having dinner with Todd Fisher and the super-talented Larry Elmore. Elmore is from Kentucky and we talked about all sorts of fun southern stuff. I’d met him before, sometime back in the late 80s or early 90s, but never had the opportunity to “hang out.” Brittany and I hadn’t planned to even hang out because of being tired from the drive, but when the night was over, we were very glad we did!