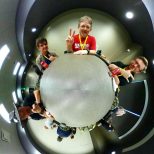 Wow, but what a very cool show this is! I could probably write a novel as to what a good show it is, but I’ll stick to this blog post.

I traveled to Conway with my pal, fantastic inker, and indy comic creator Jeff Whiting. Jeff and I, due to our proximity, travel to a lot of shows together. It’s more economical and it’s just more fun to have a traveling buddy. Of course, since I own no cellphone, Jeff checks in places and tags me—but his camera takes the coolest images—will try to copy one here.

Friday night was a meet and greet at the Faulkner County Library, the sponsor for the con. Free passes were given to those in the front of the line and all the guests had a chance to meet those in attendance. The show had a cool lineup, which included: Howard Mackie (who’s written over 100 comics!),   and Timothy Lim. Some non-comic celebrities included Andy Field, Mark Dodson, Travis Langley, and John Russo. Some of the guests I knew, several are now new friends!

Saturday was non-stop chatting with new fans. In fact, I talked so much that my throat was a little sore that night. It was fine the next day…and Sunday was more of the same.

Jimmy and Kara Dyer and their crew run a fantastic show. One of my favorite aspects of the show was the focus on comics. I mean, heck, I’m both a comic fan and a comic maker—I love comics. I like to see comic creators at a “COMIC” show…and tables full of boxes! 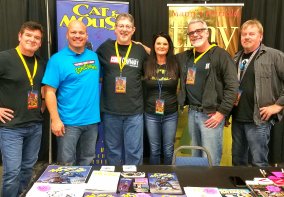 If you’re a fan of comics and you can reasonably make the annual ComiConway, you’ll be doing yourself a favor to go. If you create comics and are ever invited to this show, you’d better not say no. 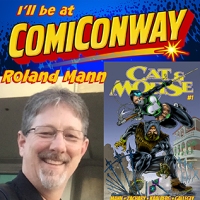 If you’re in the Conway, Arkansas area this weekend, come see me as I’ll be a comics guest at ComiConway. The show has been going on for some years, but I couldn’t find the actual number–it’s been several, I know that. I’ve heard SO MANY great things about this show that I’m giddy to go—and incredibly honored to be one of the guests among so many awesome folks.

Don’t believe me, check out the list here: https://www.comiconway.com/guests

Obviously, I’ll have a bunch of my newer stuff for you to pick up–with Christmas just around the corner, signed graphic novels and comics make GREAT gifts. I’m also happy to sign anything of mine you already have–just bring it in. If you want or need a checklist, try this one: http://www.comicbookdb.com/creator.php?ID=2182

Among the guests will be my pal, artist and Cat & Mouse penciller, Dean Zachary (Sat and Sun only). His picture makes him look a bit like James Bond, doesn’t it? Ha. Dean is also a newlywed, so come wish him congratulations Hopefully, our tables will be beside one another so it’ll be easy to get your Cat & Mouse #1 copies signed! Additionally, he’ll have ORIGINAL PAGES from Cat & Mouse with him for sale—as well as, I’m sure, a lot of other very cool art. You can probably even get a rare original commission from him if you’re nice! Here’s a bunch of other stuff Dean has done–so bring stuff for him to sign, too! http://www.comicbookdb.com/creator.php?ID=1703

My traveling buddy is none other than the spectacular Jeff Whiting. Jeff used to do a bunch of inking for me “back in the day,” he even inked a bunch of Dean’s stuff, so be sure to bring those back issues to get both their signatures! Jeff has also worked on The Tick, and he has his creator owned books Shanghai and Extra-Terrestrial (in which I have a short comic work!). http://www.comicbookdb.com/creator.php?ID=4477

I haven’t seen a schedule yet, but they’ve asked me about panels, so I’m sure you can find me yakking about something comic related. But if not, you can swing by and say hello and we’ll talk comics!

Cat & Mouse #1 kickstarter slated for May 1

I’m super-excited to announce to you that May 1 is our target launch date for the kickstarter campaign for Cat & Mouse #1. I know we’ve been teasing it for a while, but we’re finally there.

I won’t talk long here, but don’t be surprised if over the course of the next few weeks, you see images with our announcement. I can tell you this, though: the campaign will feature the comic, of course, and it will have a KICKSTARTER ONLY wraparound cover! Unlike some other comic campaigns I’ve seen, this is the ONLY way you’ll be able to get the comic with this cover. Oh, you’ll still be able to get the comic, just not the KS wraparound version.

Also, I’ve managed to put together a couple of complete sets of volume 1—all 18 issues. I’ve culled back issue boxes and even ordered a handful of them from Mile High to complete a few sets. Full sets are pretty tough to come by…so there will be a few available.

Also, I’ve got about 10 copies left of the very first edition of Cat & Mouse #1. A lot of folks don’t realize that before Malibu’s Aircel picked us up, C&M #1 was printed—on newsprint and in COLOR!—by EFGraphics. EFG also printed Jazz Age Chronicles by Ted Slampyak…but EFG went belly up before they could print C&M #2. Those copies of C&M #1 will be available as a limited pledge reward.

I’ve also been hounding some of my artist pals to do some art for us and I think you’ll be happy at what you see! I won’t mention all of them now, but I’ll mention that the first one to raise his hand and say he’d help is the hot new artist Timothy Lim. You’ve seen his work on Thump: the First Bundred Days, and My Hero Magademia. This will be your chance to get a one of a kind original work from him!

So, mark your calendars!