What an incredibly busy week last week was…non-stop all the way through Sunday p.m. I know that you all want a report on Brittany’s competition. I do have video, but I haven’t had the chance to download or put it on youtube yet…the quality of the video isn’t that great, though.

Brittany, however, did fantastic. Her performances just keep getting better and better. While the competition didn’t seem to be as good this year as last, there were still some very talented kids performing. It also never fails that I hear some song for the first time during the process of the Mid-South Talent Fair…and then within the next day or so, hear it on the radio.

autograph signing at Van’s Comics. I went earlier Friday than I really had to, but I was able to meet my long-time friend Steven Butler in Jackson for lunch. We spent the next 5 hours hanging out in Shoney’s and catching up. Man, but it doesn’t feel like we were roommates 20 years ago! Steven and I stayed with my other very good friend, Ashley Koostra. Ashley (pictured at right) is also a former roommate of mine. In fact, for 12 whole months in 1989, the three of us were roommates, along with David Rogers. With the exception of having no hair now, Ashley looks no different than he did back then. Steven and I have both added a few pounds since then…but just a few.

After dinner, the three of us sat up at Ashley’s reminiscing about so many things that we lost track of time. He had to work the next morning and Steven and I were slated to be at Van’s at 9:30. I shan’t say at what time we finally hit the sack, but it was later than it should have been!

The next day Steven and I set up at Van’s. I’d never been to Van’s and really didn’t know what to expect of the day. The day was really spearheaded by Andy Childress, a comic creator out of Louisville, MS. Andy’s got a fire lit to promote Mississippi comic talent. His driven energy reminds me much of the old Silverline gang and the reasons it was formed to begin with. Way back then, Steven and I also thought that Mississippi (and surrounding areas) had an incredible wealth of untapped talent. Thus Silverline was born.

Sales-wise/customer-wise, the day was very sad (I often wondered where . It was a beautiful day, but the store had very little foot traffic and therefore we had very few folks to come by and talk to us. The comic creators, however, had a grand time, talking uninhibited about all things comic and geek! It also gave me the opportunity to meet some Mississippi

creative talent I’d not met before. I had the chance to snap a few photos during the day, too. Pictured are: Steven Butler (seated) and standing L-R: Andy Childress, Chuck Jett, Shane Sullivan, Kevin Hayman.

Afterwards, bemoaning our lack of sales for the day, we headed next door and grabbed a sandwich and continued to geek out. All in all, a good time was had by all.

I returned home late that night in order to get up the next morning and take Brittany to her first practice for Southern Sounds. They’ll be performing in Jackson soon…more on that in a future blog!

I spent last week in the company of some of the brightest and most talented teenagers I’ve ever had the opportunity to be around. As one of the instructors in the 4H Technology and Expressive Arts Camp held at Mississippi State University, I spent the week teaching “Graphic Storytelling” to a group of teenagers interested in that art. Other tracks offered at the camp were logo design, dancing, robotics, gaming and creative writing. Dancing seemed to be the most popular track—Dancing with the Stars, I guess?

I’ve taught Graphic Storytelling before and hope to do so many times again in the future. Graphic storytelling is something I enjoy and I like the idea of helping to pass on that love to younger artists. The cool thing is that the concepts work not just for comic books or graphic novels, but also for movies, animation, and even video games. 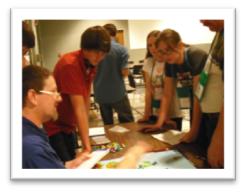 I was also able to meet the best-selling author Bryan Davis (Dragons in our Midst) and hear him speak at the camp. What an incredibly nice guy he is! I’d recommend picking up one of his books on that fact alone!

But really, I was most impressed by the kids. And before you go there—yes, I probably allowed myself to pre-suppose what the kids were like: this was a 4H camp, after all, they’re used to working with horses and goats and cows. Boy was I surprised. One group of the campers built a robot using legos…and then controlled it with a Wii remote! It was a working forklift robot and it was demonstrated on the last day—I saw the thing work!

Then there was this group of incredibly gifted musicians that played/performed during most of the breaks. Music wasn’t one of the tracks, it just happened to be what they did in between sessions and during breaks. I first heard them and saw the display of talent the first night we were there during a talent show. Seems a bunch of the kids, though, are part of a group called “Southern Sounds” and travel around 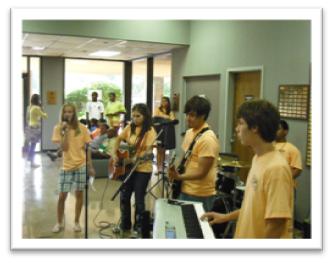 considerably so that they can perform. Brittany sang Sky Full of Angels for her part in the talent show and was later asked to be a part of the group. Before the week was over, the group was doing several new songs and performed for a luncheon on Friday. Brittany sang Proud Mary with them, a song which she’d never heard before. One of the Moms caught it on video, so I’m hoping to get a copy and post it on Youtube before long. Yeah—I’ll post it here when I do!

One really fun thing I was able to do was teach an entire new group the incredibly awesome game of Diplomacy! I’d planned to only do the game one night, but they had so much fun they demanded I run it the second night as well. A couple of the players even asked me where they could obtain a copy for themselves. Of course, it is out of print so I could only send them to ebay. However, they’ve let me know already that they’ve signed up for an online game.

Needless to say, I learned a lot about 4H last week…and there seems to be so much more I need to learn!