I’m afraid to look at the date before I “publish” this one…but I know it was sometime in July. Where oh where has the time gone? Well, for me personally, mostly school. Trying to balance my school with a busy summer schedule was hectic! With a capital WOW! There’s so much to catch up on, I hardly know where to start.

But I gotta start somewhere so I’ll start with Brittany having a go at American Idol. When we learned they lowered the age to 15 this year AND that there were auditions in Nashville AND it was conveniently placed next to Camp Electric on the calendar…well, we decided to do it. Brittany and I went to stand in line around 4 that morning and found the line already formed. However, once it was all said and done, we were in the first ¼ of the entire line. While she didn’t make it past the first round, it was a great experience for her. I was impressed by how efficient

they were in their organization. Those guys know what they’re doing.

Brittany has been offered a contract/representation by CTA and we’re still examining those possibilities and praying about it. It sounds very good, but we don’t want to jump into it blind and make a bad decision that she’ll be stuck with. She’s competing in a contest that I’d encourage you to go vote for her here.

She’ll also be competing at the MidSouth Talent Fair Thursday, September 30. This will be her fourth year to compete there, her third in the “senior” category (which is ages 13-21). Come out if you can, and cheer her on.

Brett’s big event is his braces—which he didn’t want. He’s only had them on for two weeks, but we can already see major movement in his teeth!

I’ve had a busy summer also signing copies of Buying Time and working to promote it. I wish I’d had more time—maybe I should “buy” some, huh? Ha. Davis-Kidd Booksellers in Memphis had me up for a reading and a signing and I was happy to have several family members and friends come out to support me. I can’t mention all of you, but if you were there, thank you for coming. If you couldn’t make it, DK graciously put some copies on their shelves, so go in and ask for it and pick up a copy!

This summer, I’ve managed to get myself some podcasting interviews. While I’ve been interviewed on television and for the paper and such before, this was a completely new experience for me—and I had a lot of fun. The first time I went on was with the Imagicopter folks. Next I went on with Andy Childress of bubbaworldcomix.com when we were at SFCC in Jackson. We were interviewed by Cody Shedd and Danny Rushing and had a blast. I’m hoping they’ll holler at me again for a follow up! And then, I had a very cool conversation with John Wilkerson, Jesus Geek. We had such a good time John had to split

it into two parts: Part 1 and Part 2. In fact, we talked for another 20 minutes off air as we figured out that we knew some of the same folks out in Killeen, Texas! You should go listen to them—drive up the hits if nothing else! J

This coming Saturday, September 25, while the Razorbacks are beating Alabama, I’ll be at the Winston County Library in Louisville, Mississippi from 9 a.m. until that afternoon. I’ll be there with a handful of authors and artists, so if you’re in the area, come out and see us! You already know about Buying Time, Wizard of Oz, Huck Finn, but I’m also able to promote now Martyrs, an anthology of the early Christian Martyrs in which I wrote a 12 page story of Polycarp.

On October 2, I’ll be the keynote speaker for a Writing Retreat in Byhalia. I’ll be in Coffeeville, Mississippi the next Saturday, October 9. And then, I’ll blink my eyes and it’ll be November and I’ll lead the Hemingway Writers Retreat in Piggott, Arkansas. So, for those of you who read this blog regularly (thank you!), I apologize if I don’t get here as often the next several weeks!

What an incredibly busy week last week was…non-stop all the way through Sunday p.m. I know that you all want a report on Brittany’s competition. I do have video, but I haven’t had the chance to download or put it on youtube yet…the quality of the video isn’t that great, though.

Brittany, however, did fantastic. Her performances just keep getting better and better. While the competition didn’t seem to be as good this year as last, there were still some very talented kids performing. It also never fails that I hear some song for the first time during the process of the Mid-South Talent Fair…and then within the next day or so, hear it on the radio. 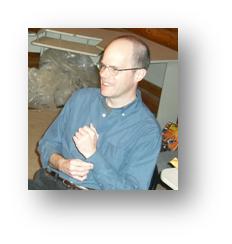 autograph signing at Van’s Comics. I went earlier Friday than I really had to, but I was able to meet my long-time friend Steven Butler in Jackson for lunch. We spent the next 5 hours hanging out in Shoney’s and catching up. Man, but it doesn’t feel like we were roommates 20 years ago! Steven and I stayed with my other very good friend, Ashley Koostra. Ashley (pictured at right) is also a former roommate of mine. In fact, for 12 whole months in 1989, the three of us were roommates, along with David Rogers. With the exception of having no hair now, Ashley looks no different than he did back then. Steven and I have both added a few pounds since then…but just a few.

After dinner, the three of us sat up at Ashley’s reminiscing about so many things that we lost track of time. He had to work the next morning and Steven and I were slated to be at Van’s at 9:30. I shan’t say at what time we finally hit the sack, but it was later than it should have been! 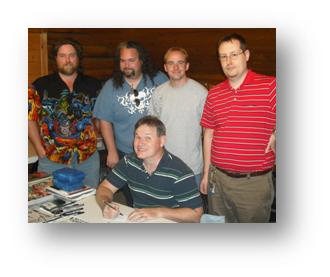 The next day Steven and I set up at Van’s. I’d never been to Van’s and really didn’t know what to expect of the day. The day was really spearheaded by Andy Childress, a comic creator out of Louisville, MS. Andy’s got a fire lit to promote Mississippi comic talent. His driven energy reminds me much of the old Silverline gang and the reasons it was formed to begin with. Way back then, Steven and I also thought that Mississippi (and surrounding areas) had an incredible wealth of untapped talent. Thus Silverline was born.

Sales-wise/customer-wise, the day was very sad (I often wondered where . It was a beautiful day, but the store had very little foot traffic and therefore we had very few folks to come by and talk to us. The comic creators, however, had a grand time, talking uninhibited about all things comic and geek! It also gave me the opportunity to meet some Mississippi 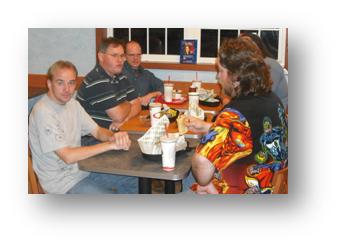 creative talent I’d not met before. I had the chance to snap a few photos during the day, too. Pictured are: Steven Butler (seated) and standing L-R: Andy Childress, Chuck Jett, Shane Sullivan, Kevin Hayman.

Afterwards, bemoaning our lack of sales for the day, we headed next door and grabbed a sandwich and continued to geek out. All in all, a good time was had by all.

I returned home late that night in order to get up the next morning and take Brittany to her first practice for Southern Sounds. They’ll be performing in Jackson soon…more on that in a future blog!

I’m now officially registered for coursework towards a MFA (Master of Fine Arts) in Creative Writing. I’m very excited about it, too…in fact, even a little nervous. The MFA in Creative Writing is 100% geared toward writing creatively. No foreign languages or math classes for me, thank you very much. I’ve been overwhelmed this last week with reading all about registration, the course-work, etc. I’ll be able to do most of it from home, and as most of you know—that’s a huge relief to me. Not sure when my first assignment is due, but I’ll be turning in 25-30 pages of original work!

No real news on the hunt for a publisher for The Gifted. Kimberly, my agent, has gotten some decent feedback, but a couple of them have said it was for a younger audience than what they were looking for. Guess I’ll have to work on “upping” my audience. Cat & Mouse, the novel I’m working on now should definitely have older content. In talking with Kimberly, I guess I’m really shooting for the Twilight age audience…essentially, Brittany’s age. She enjoyed The Gifted, but I do realize she has Daddy-bias. But in my discussions with Kimberly, we talked about a few things I could add to help get that audience. Not sure it will work, but I’m willing to try it.

And that’s really what’s been keeping me busy; my revisions for Cat & Mouse. I’ve just now reached the point where I was “at,” in my writing anyway. The revisions aren’t huge, but they take some reworking to make sure everything works just right. Either way, I’m still right at 25,000 words and that’s pretty exciting.

Another project I’ve spent a little time on is something tentatively called Moonbeam Bobby, a possible comic-style story about a missionary kid on the Moon. His Mom and Dad are missionaries to outgoing colonists and he’s just “stuck” there. I’ll post material here when I get the okay!

I think I said this earlier, but Brittany has been offered a bid in the Mid-South Talent Fair. She’s very excited about that and has really worked on her stage presence this year. She’s got the song down; she should, she’s been doing it all summer. For those of you in the Mid-South area, she will perform October 1, at 7:30 p.m. The competition takes place at the Desoto Civic Center. But don’t bring your video camera or camera—seems they want to charge you $50 for one of their “professionally” produced things.