During my recent trip to Chicago to lead writing workshops at Karitos, I had the opportunity to talk to the mom of a young writer. Seems young writer had enjoyed one of my workshops (yea, me!) and had said as much to mom…and mom was simply offering a very kind thank you. She bumped in to me in the parking lot of the hotel where I’d just returned from having dinner with my long-lost (well, sorta. I’m pretty sure he always knew where he was) pal John Metych, whose last name I now pronounce correctly! For those one or two of you who don’t know, John is the writer of the very cool comic series Sniper and Rook. You should check it out!

But anyway, it was fun to talk to the mom with her writer-daughter there because I was able to tell them both things that I think (hope?) will aid their relationship as the young writer grows.

One of the things we talked about was writing environment and getting into the groove while writing…and breaking that groove. A writer’s cave…or back porch or wherever you write…should be set up in such a way as to get UNINTERUPTED creative time. I strongly stress uninterrupted because sometimes when a writer gets in a groove, when the fingers are flying on the keyboard almost faster than the writer can think (not a difficult task for me!), it’s very hard to get that groove back.

I told her the story of me working on my first novel and trying to get BJ to understand that. You see, that’s one of the things I tried to explain to writer-daughter’s mom and writer-daughter herself: people who aren’t writers will NEVER “get” writers. Try though they may and good-hearted though they may be, it just won’t happen.

So when we lived in Loretto, TN, I was teaching at UNA and BJ had quit her job to stay home with the kids. Her being home was a new adjustment for us and she worked hard at it. After a few polite interruptions, I had to tell her no interruptions, period. Wouldn’t you know it, not long after (not in the same day, silly!), I’m on a writing tear and she pops her head in and says “I’m not interrupting; I just wanted to know if you needed anything.”

Now, only a thick-skulled Yankee would not see she was, in her mind, being just as sweet as she could be—even whispering the words. To her, it was a thoughtful thing to do (to me, too, but bear with me). But it was an interruption, sweet though it may have been, and jolted me out of the world that exists only in my head and that I was trying desperately to get onto paper (well, computer file).

It’s a bit like those stop signs (or lights) they put on the highways. You’re rockin’ along at 65 miles per hour (because that is the speed limit!) and out of nowhere a stop sign pops up. You have to stop. Yes, you get going again, but you start from a dead stop and it takes time to pick up speed again, time that you might not have during that sitting.

I told writer-daughter she still has to listen to mom; she’s 14, after all!

So this coming school year will find Brett in the 7th grade. Uh…wow. When did THAT happen? As one of the coming of age rituals that FBC does, all the incoming 7th graders get to take a trip—thus, “The Big 7 Trip.” As a dad, I got to go, too! To be honest, I’d been working so much lately, that when BJ asked me and said that it was so I could go with Brett, I said yes automatically without even asking what it was. Truthfully, it probably wouldn’t have mattered—I would have wanted to go with him anyway.

When it came time to go, I finally asked what it was. We made our way to Stone Mountain, GA. and got to participate in the AtlantaFest, a three day long music festival. In between watching some cool shows, we got to go play around Stone Mountain. Needless to say, it was a lot of fun. Brett got to stay in a hotel room with his good buddy Bryce, chaperone free! Dangerous, yes? They did great…except for the fact that Bryce drank a 20 once Coke…and apparently that causes him to NOT sleep…and their air conditioner didn’t work the first night and the two of them burned up!

There were several acts, but the highlights were Toby Mac and Jeremy Camp. We got to see the Skit Guys live, and Coach Mark Richt was one of the speakers. I’m not really a Georgia fan, but I’m a big 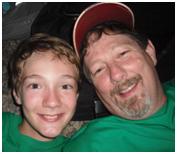 Mark Richt fan. Hearing him tell his story was pretty cool. He nearly converted me to a Georgia fan.

Okay, not really, but he was a good speaker.

The group of us rode the tram up to the top of Stone Mountain, played around a bit, then rode back down…except for me and Brett and Bryce. We decided to walk down and around the mountain to return to the park. On our way back, the three of us hid in the bushes when the tour train went by and we whooped and hollered like wild Indians. Pretty sure it didn’t fool any of the passengers, but it was pretty funny anyway. Brett and Bryce then did a high ropes course while I sat and watched.

Brett and I got to walk around some and snagged us some AtlantaFest swag. I discovered that Brittany can’t stand that I use that term. Seems she thinks her generation created it…or something. Whatever. We got to watch a short preview of the film Hellbound, picked up a free CD of B-SHOC, got a free bandana from Christian Connections and had our picture taken by them, then talked to Lauren Jones, the president of Reactiv Wear, a company that creates some spiffy designer apparel with the idea of

challenging believers to rise above the situation and react as Christ would. Some pretty cool stuff, be sure to check out their website. And while the entire thing was new to me, I learned the AtlantaFest has been going on for over 20 years! Maybe next year they’ll invite one of my favorites, like Guardian or Petra. Brett even mentioned he’d want to return if Petra played!

I want to mention again the two upcoming conferences where I’ll be teaching. The first is Karitos at Wheaton Academy in the Chicago area. It’ll be July 12-14 and I’ll be teaching several sessions there in the literary track. This is the first year to be at Karitos, but my old college pal Justice Carmon will be there and I’m excited to see him and be a part of the conference. The second is the Gideon Media Festival. It’ll be August 11-16 and it’s my second year to be there. Added this year is a comic writer and artist contest and a comic gala. There were threats to try add a ComicCon there, but I think it was too much to try to add so quickly. Maybe next year. Anyway, check out the conferences and make plans to go if you can. You won’t regret it.

I had the fantastic opportunity to return to my Alma Mater this past week and what an incredible time I had. First, I was honored to take part in a panel of Young Adult Alumni on the Care and Tending of Books. Also on the panel was (my good friend and fantastic writer) Marjetta Geerling, Cory Jackson, Kelly Creagh, Edie Edith Hemingway, Stephanie Stuve-Bodeen. There were six of us total and each of us had a slightly different story to tell. Dunno if they were just being kind, but several attendees mentioned they thought it was one of the better of the residency.

Those who frequent this spot know that I highly recommend the Spalding MFA program for Writing (Yes, I also teach in an MFA program, but we teach Writing for Entertainment and don’t even cover prose or poetry…so it’s very much non-competitive kind of thing). My experience there was a far better experience than I had with my Bachelor’s in Creative Writing. Spalding has a very “nurture the writer” mentality, not smash them upside the head and make them feel horrible one.

As part of my trip there, I got to participate in the Homecoming festivities for the MFA program. While it was my first homecoming, it certainly wasn’t the first homecoming for the university or program. Part of the festivities includes what’s called the SPLoveFest, a short period of time when Alumni get to set up at a table and peddle their wares—mostly recently published books of one sort or another. I set up at one of the tables and displayed several of my comic series, including the graphic novels The Adventures of Huckleberry Finn and Wonderful Wizard of Oz. Ever the classics, they were popular amongst my more literary brethren at Spalding. I was further excited that several asked about my as-yet-to-be-published The Interns. No news on that yet, but stay tuned.

A couple of you noted that I did not blog last week. I apologize for that. We are trying to sell our home in Oxford so that we can effect a move to Orlando and the task of continually keeping the house ready to show just caused me to let that date slip right on by me. I’ll try not to let it happen again. I’ve got more material for Writer’s Mistakes in the not too distant future, weaned, of course, from my students and just from around the internet.

I’ll be appearing at the Gideon Media Festival again this year August 11-16. There is a comic contest available (as well as some other contests if the dates haven’t already passed), so go check it out. Additionally, I’ll be appearing at the Karitos in July (12-14) [like them on FB here]. Still working out the details for this one, but I’m looking forward to them both. Check them out!

Photo is YA author Rebekah J. Harris, me, and Marjetta Geerling, courtesy of Rebekah.