While I’ve been to dozens of writers conferences in the past, this is the first time for me to attend the Florida Writers Conference. Had it not been so local, I’m not sure I would have attended this year.

But I’m glad I did. Of course, I have my Full Sail colleague Jennie Jarvis to thank for that.

Wow, but what a cool conference. It’s already clear to me that many of the attendees there feel and think of each other as family as many of the conversations I heard sounded like those from a family reunion. There were tears shed for those who were no longer able to join the conference or who had passed on. I didn’t know them, of course, but you could tell by the shared emotions of the group that they were talking about a family member.

It’s the kind of group that you want to be a part of because writers are an odd sort. And I mean that in the most affectionate way. They’re (and when I say “they,” they includes me) just weird and nobody understands them but other writers. It’s just the way it is.

I made new friends and some potentially cool contacts as well (maybe they’re both and the same, who knows?). I even discovered there are a few writers groups nearby—and they quickly invited me to be a part of the group. 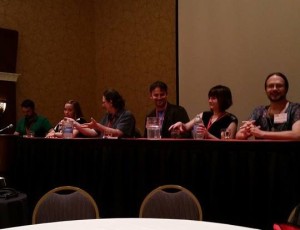 I spoke twice on writing comics, once to the main part of the conference and the other time to the young writers conference. The young writers asked some pretty cool questions, too! The good news (for me, that is) is that portion seemed to go over well and I’m already talking with them about next year! Yes, that’s very exciting to me.

I also sat on a transmedia panel with some talented folks (including my Full Sail colleagues Julie Anne Wight, Dr. Tof Eklund moderated by the talented Allen Gorney!) where we talked about taking stories to different formats. It’s cool to hear so much interest in graphic novels.

On a more writing related note, got the first rejection to the C&M reboot. Sigh. Shall soldier on. Nothing more on BEAH, but am about to lick the stamp for CITIZENS. Cross your fingers!

Most of you reading this know me at some level. I don’t think I get many random readers here, not on the usual entries, anyway (there are a couple of my posts that frequently get random visitors…I may talk about those one day…but not today). So most of you know that I’m a pretty open book.

But, it’s a little spooky for me opening up to write this entry…so deep breath (now that I can do that again!) and here I go.

You see, I had a scare this past week and am just getting out of a few days stay in the hospital. On Sunday, I had a sharp pain in my upper back that knocked the breath out of me; I wasn’t doing anything but sitting down. It became painful just to breathe in deep breaths. I could still breathe, I just had to take shallow breaths. Well, me being in Florida, 750 miles away from my family and with no internet in my apartment, I called BJ and asked her to google a few things. The results came back as signs of a heart attack. Add that to the fact that my extended family has a history of heart related issues…add to that the fact that I just had a birthday that put me one more year closer to 50…and so decided not to take any chances and visit the ER.

Actually, BJ told me to go.

I’d had the pain before, about 5 or 6 times. Each time I’d just written it off as some sort of nasty back spasm that somehow knocks the breath out of me and makes it hard to breathe for several minutes. I know, I know…I’ve never claimed to be brilliant! The last time it happened, Brittany was standing near me and my reaction scared her even though I tried to assure her (I’m sure the look on her face was in the back of my mind this last time, too) I was fine.

And so as I talked to BJ on the phone about going to ER, I remembered I’d read of people have “small” heart attacks and not going in to the doctor…and I thought suddenly that could very well be the case.

So, the folks at Winter Park Memorial Hospital (who were all very fantastic, I might add!—and I say that because I haven’t gotten the bill yet! But the people were still fantastic!) took me in and proceeded to run tests on me.

Truth to tell, the test and testing hurt me more than the initial pain. I’m still bruised and sore as I type this. They drew blood from the back of my hand and I have six tiny holes in my right hand and two in my left. I had an IV in my left bicep (because my veins aren’t easy to get to) and one in my right forearm that stuck nearly straight down—they had to go deep to get blood from there AND they used a thicker needle. Yes, it hurt…and continued to offer a dull reminder that it was there the entire time it stuck there.

I’ll spare you the details of the tests, but the results were that I did NOT have a heart attack, but that I DO have Myocardial Bridging of the LAD. In a nutshell, we have muscles and blood vessels that surround/cover our heart. I have a vein that is supposed to be over the muscle, but in one place dips under the muscle. Every time that muscle squeezes—which it will continue to do as long as my heart is beating—it cuts off the blood in that one vessel.

Yeah—that was my first thought, too, but the doctors assured me that they do not need to go in and move it, that I was born with it and that it shouldn’t be life threatening…but I will be forever bothered with the pains that I now know where they come from and even will have the occasional “attack” (but not as in heart attack) like I had on Sunday and that I’m just going to have to deal with it.

And even though I told her NOT to come to Florida, I was relieved to see BJ when she walked into the room (thanks, JJ!). Needless to say…things were a little scary in the early part of this week.

I know there were a bunch of prayer warriors that I didn’t even know about—thank you for that.

The next post should be back to my normal blathering. 🙂

Marathon Mann (or a Mann of extremes)

I seem to have become a man of extremes; at least the past couple of weeks and it appears for the next few weeks. Yes, I know I told you last time I wrote in this space that I’d talk about my upcoming experiences.

Not intentionally, of course. I’ll make good on my word next time because I’ve got some cool things to talk about. One of them can’t wait, though. I’ll be appearing all day at MidSouthCon this coming Saturday. Bring stuff for me to sign, or pick them up while you’re there, but come out and see me. I’m scheduled for 4 events, but will be around the convention most of the day: 11 a.m. Playing in Other People’s Sandboxes: How to write and publish media tie-in novels; 1 p.m. Pro-Row: autograph sessions; 3 p.m. Marketing for Authors: How to get your name out there and get people reading your work; 5 p.m. Indie Comics: IDW, Dark Horse, Atlas, Dynamite, etc. Good products from smaller publishers.

Back to extremes…It really began last week when the kids were out of school for Spring Break (hint here as to why there was no blog last week!). First extreme: We spent 13 hours driving to Orlando. All three of us crammed in to the cab of my truck!

Next extreme: Brittany’s new bikini was extremely…valuable! I mean the threads must have been dipped in gold. It’s not that we spent an incredible amount of money on it, but that the prices per yard…nay, foot, is extremely high!

Next: We had an extremely fun and long day at Universal thanks to Phil Mitchem and our wonderful tour guide (and my work colleague) Jennie Jarvis. What was planned as a 9 hour day turned in to a 12 hour day thanks—in part—to a two hour wait in the Harry Potter ride line. It was supposed to have a picture here, but my extremely busy daughter extremely forgot to send it to me.

The next extreme was a beach day where the kids got to see the Atlantic Ocean for the first time. I didn’t realize when I took them that New Smyrna Beach is the shark bite capital of the East Coast. And no, no extreme pictures exist of the great white flesh!

Next: the 13 hour drive back to Oxpatch. ‘Nuff said.

Next: the Honey-do list waiting on me upon my return. I got extreme with the lawn, a copperhead (dead now, he is), and a flat tire on my riding mower—still flat unless BJ has extremely remedied the problem. Yeah, still flat.

Not quite so extreme, but close, the Sunday return to Orlando via jet plane cutting short an extremely short stay home.

Next extreme was the near 15 hours I spent in the office yesterday playing catch-up to last week (I still haven’t figured out how to grade papers while driving for 13 hours, but I will take any and all suggestions).

And for the forthcoming extremes…well, you’ll have to wait an extremely shot 7 days for that!