If you missed the earlier parts and want to read them, you can find part 1 here and part 2 here.

From the back porch, we could actually see across the big open field behind us (it’s a community park) and see lights on. None of the homes around us had light, but about a quarter mile away or a little more, the community there had power!

There was a curfew in place, and since both Full Sail University (where I teach) and Oviedo High School (where Brett attends HS) were closed, we just hung out at the house. We didn’t really have anywhere to go.

Tuesday was hot, and so Brett and I hopped in the truck to go get gas and maybe a burger. I wasn’t sure how long I’d need to run the generator and I didn’t want to lose the contents of the freezer and fridge. With the generator going, at least we could dive in to the contents some. If it wasn’t sandwiches, I grilled what we ate.

Tuesday night was so hot it was miserable. So much that I got our box fan and sucked some of the power from the generator to run it hitting me and Brett (I was on a mattress in the living room floor, Brett on the couch beside me). Neither one of us got much sleep, and going outside really didn’t do us much good, either.

Power began to flicker on and off on Wednesday. It’d come on and we’d cheer…wait a few minutes…then it’d go off. Faked me pretty good once as I even unhooked the generator…then it went back off.

It finally came back on to stay around 6pm, one hour shy of a full three days.

OHS had gone ahead and cancelled school for the rest of the week…as did Full Sail. So Brett and I filled the rest of our week playing games. We still didn’t really have anywhere to go…so we didn’t go.

Probably a bit of a letdown for part 3, I guess, but really, the “exciting” part was during the build-up and the actual storm itself.

Next week I’m going to rant about Free Speech! Yeah…I got worked up a little.

The roof started to leak on my comics!

Got the comics away fro the windows!

So, I’d expected the power to go off somewhere around 1-3am Monday morning, but not 7pm Sunday night. That actually made me a little more worried (I hadn’t been that worried) thinking it might be worse than anticipated.

The roof was leaking early in the storm, right on top of my comics—so I moved every single box of them away from the leak and from the windows. Yeah, most of them are bagged…but not all of them. So I wanted to move them just to be safe. Plus…comics!

(video: since the power would be out for a while, Brett wants snacks!)

My truck up next to the front windows

One mistake I made was not having a portable radio. I had a couple of flashlights, but I had no idea what was going on—I couldn’t just on weather.com to see! So—since I don’t have a cellphone—Brett spent time on his cellphone back and forth with BJ. She had gone to Mississippi to be with her dad who was about to have surgery and was monitoring it all from afar. She’d try to send us screenshots of the radar down here, but connections were very spotty for Brett.

BJ stayed up as long as she could…but I needed to hear that radio! So, because I was still a little afraid of something coming through the front window, I went outside and pulled my truck up right next to the house. I figured it something hit my truck, it’s old and I could get insurance to cover most of it. If something came through the window, it wasn’t just “stuff,” Brett and I were both in there!

I listened to the radio some on and off, running back and forth to the truck, and Brett and I pretty much spent the rest of the night watching the storm. We’d stand out front and watch, then go to the back porch. We actually didn’t stay on the back long because, well, the sound back there was pretty scary, especially later. It’d come up a really strong wind and I thought the trees were gonna come over on us—so we stayed off the back porch. Oddly, we really didn’t get that much rain after the initial rainfall, it was mostly just high winds. Water never went over the entire street in front of the house like I expected it to. It’s done that before during really heavy rains. I tried to take some video from the front porch—and I’ll put it here, but you can’t see much when it’s dark.

Once the sun came up and we knew the worst was over, I got the generator going to keep the refrigerator and freezer going…Then the power came back on, so I shut the generator off. Cranked the AC up and got the house cooled down…then the power went off again. But it was cool enough that we hit the sack. I can’t be sure of the time (remember, no power), but probably around 10ish.

We both slept a good bit of daylight hours. The house was still cool because it was overcast and very windy. When we got up, we started putting the house back in order. We ate our sandwiches on the back porch (no trees fell! Yay!) And that’s when we noticed some fences down across the street.
(Never tried to include any videos before–hope they work)

Keep in mind, I live in the Orlando area and we weren’t hit near as hard as many of the folks to the south and west of us. So nothing you’ll read here can even compare to what many of them—and then later (and a different hurricane), Puerto Rico.

The positive thing about hurricanes today is that you can see them coming days in advance. After it hit the islands, we decided it would probably be a thing of concern. BJ (the wife) left to go spend a few weeks taking care of her dad who was having a surgery, so it was just me and Brett. All predictions showed it hitting us in the early morning hours of Monday, Sept 11. (Ugh, what a day to pick, right?) 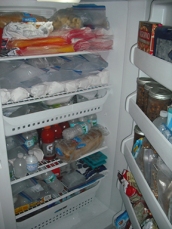 Freezer is loaded with water/ice!

On Wednesday, Sept 6, after class, I had decided to stop and pick up some supplies and fill up the gas tank. I first stopped at CostCo, which is right by Full Sail. No water! And the gas line was crazy stupid, so I figured that far out, I’ll just get gas and such elsewhere—surely there would be more shipments, right?

I chilled on Thursday and watched the news as thousands of people clogged the roads trying to get out of Florida. Stories of people sitting on the roads for hours not moving, people running out of gas in North Florida…and then into Georgia made me decide to just stay put. We’re inland and not in a low area prone to flooding. Figured we’d lose power a bit, probably at the height of the storm in the wee morning hours, and figured I would have to keep an eye on the trees.

Friday I made the rounds to the grocery stores. I’ve never seen stores so bare in all my life. It looked like videos I’d seen of grocery stores in Russia! I managed to snag a few cans of Vienna Sausage, some bread, and some gas. No water, still. 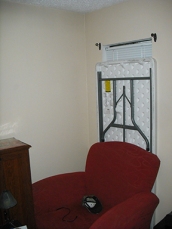 Table wedged up against the window in the living room.

Went back out on Saturday looking for a few other things (we like potted meat—so sue me!)…was surprised at how many places had already closed up shop. None of my neighbors, many who have been here for quite a few years, had boarded up or anything. Cool.

Sunday, I spent the day filling all plastic containers in the house with filtered tap water; we filled up milk jugs, coke bottles, etc., putting a lot of the smaller plastics in the freezer to try to make sure we’d keep the food in the freezer frozen. Then I peeked outside. Uh-oh. Quite a few of my neighbors had suddenly boarded up their windows.

So I started shuffling things around in the house, getting books away from windows and away from the known leaky spot in the house. I propped closet doors against the windows…just in case.

And then the power went out at 7pm.