When I first started writing comics, I lived in Hattiesburg, Miss., and was a regular guest at CoastCon for several years beginning in 1989. The crew was good to me (and the entire Silverline crew), it was close, and it seemed like everyone locally was attending. But I was always aware of MidSouthCon and really wanted to go. I couldn’t go because it was either on the exact same date or the weekend before or after. Being a struggling writer, I couldn’t really afford to go to both. It wasn’t until the late 90s that I had the opportunity to go to MidSouthCon, held in Memphis, the city of my birth.

Thus I didn’t really realize it was the 30th until sometime during the day Saturday (they use the Roman numerals and since I’m not Roman, I can’t read them easily)…and I don’t know if it was that or just that it is a sign of recovery, but there were a ton of people there; it was very crowded at times—which is good.

This was the first year that a)I didn’t set up at a table; b)I didn’t attend the entire weekend (I couldn’t); c)my son, Brett, had the chance to attend a con. Because I didn’t have a table, I felt a bit orphaned. It was a strange experience. Brett seemed to love the experience, though. He played games practically the entire time (though I did tell him he couldn’t spend $60 on a sword), even electing to skip out on my panels!

My first panel of the day was shared with a few folks, including John Jackson Miller and Anthony Taylor. The topic was “Playing in other people’s sandbox,” which is about writing material that belongs to someone else (like Star Wars or Planet of the Apes). One of the common questions there was about fan fiction as it seemed several were under the impression that writing it is a good way to “get noticed.” Miller was quick to point out that the Star Wars franchise folks do not want that for fear of possible lawsuits. So it doesn’t get read by people who would matter. I’ve never really understood the draw of fan fiction and have read very little of it. My thoughts are write something original; create your own world to play in. That, or get HIRED to do the work.

I then had the opportunity to sit on the “Marketing for Authors” panel with such writers as A. P. Stephens, Janine Spendlove, Mike Preston, Peggy DeKay, and Stephen Zimmer. Zimmer was the only one I’d ever met before, but was a good panel with lots of questions from those in the audience. As you might guess, digital publishing was a big topic!

The last panel I did was “Indie Comics” with Sean Taylor and Tom Bondurant. I’ve “known” Sean for several years now, but never had the pleasure of meeting him in person and was nice to finally get to do so. Go visit Sean’s site to learn more about him. Tom writes for CBR.

I would tell you that Dean Zachary was also on the panel, but he bailed! (in his defense, he was making money in the Dealer’s Room) But I did get to visit with him and other artist extraordinaire Jim Hall and Mitch Foust. Actually, I had a more lengthy chat with Mitch on comic story-telling standing in the hallway at the close of the con which was quite enjoyable.

There’s a whole host of folks that I didn’t get to spend nearly enough time with but who I want to shout out to here: A. Christopher Drown (who was the recipient of a Darrel Award!), Alexander S.
Brown, David Blalock, Herika R. Raymer, J.L. Mulvihill, AND, some folks I had the opportunity to meet for the first time: Kimberly Richardson (who is the editor for an anthology to which I’ve submitted AND who said she remembered my story and liked it—so that bodes well for the story), S.P. Dorning (who I’ve swapped a ton of emails with, but had never met face to face), and Bobby Nash.

And since Brittany had the camera with her for Prom…I didn’t get to take any pictures. Still, a good time was had!

One of the hardest things for a writer to do has nothing at all to do with writing. Actually, ask most writers and they’ll tell you writing is the easy part. It’s all the stuff that comes after that’s so hard! Even the most successful writers today who are blessed with hard-working marketing departments didn’t always have it that way. Many of them remember the day of doing all their own marketing.

At one of the sessions at this past Arkansas Writers Conference, I talked about the art of shameless self-promotion. The funny thing is that most writers aren’t the naturally super-social kind of folks. Most writers would prefer being stuck in a room full of books…alone. Just toss in some food every now and again. But in order to successfully promote, they gotta get past that and walk outside and see people…and the sun.

Writers have to aggressively do everything in their power to promote and sell their work. I could go on about that, but this blog isn’t about that. Maybe some other date, but in a nutshell writers have to do what they can to target newspapers, radio, television and the internet.

I’ve recently become associated with a loose conglomeration of writers (and a few artists) who have banded together in an effort to pool resources when it comes to marketing, especially for those in the small press. Imagicopter is the name of the group and is the brainchild of author H. David Blalock. Basically what happens is that authors join the group, supply bio material for the website (check out my page), and then participate in special “events.” The cool thing is that it can often be difficult for a single small press writer to have a signing as bookstores are often reluctant to put a lot of time and energy into a session for a single unknown or little-known writer. However, if they can promote 4-15 (depending on space available for them) authors at the same time, then that becomes an author “event” and they’re more likely to put time, energy and effort into it.

One of the neat things is the wide variety of authors there. One of my fellow BCW pals also participates in Imagicopter.

Over the course of the last near-year, I’ve participated in events in which Imagicopter was also there (that’s how I met them, after all) and I’ve participated in events with Imagicopter. I’m completely sold on this idea and wonder why this wasn’t done much before now. If you’re a writer in the southern area and your name isn’t John Grisham, I highly recommend you check out Imagicopter’s site and see what it’s all about.

I mentioned in this space several weeks ago that 2010 was shaping up to be a busy year. On March 12-14, I was a “comic industry guest” at MidSouthCon, held in Olive Branch, Mississippi. (Though I understand the Federal Government is requiring them to move back to Tennessee next year). While I attended ShadowCon in January, this was the first full Sci-Fi/Comics Convention I’d attended as a guest in nearly a decade. Yes, it feels weird to say that as it doesn’t feel like that much time has passed.

My stay was made possible by my sister Angie who lives nearby. She put me up and gave me a soft bed to sleep in, even if I wasn’t there to visit too terribly often. I was able, though, to talk her into coming out and visiting a real geek-convention for the first time ever. She has remained oddly silent about the entire experience. This was also Brittany’s first time to visit a convention—she even got the shirt! 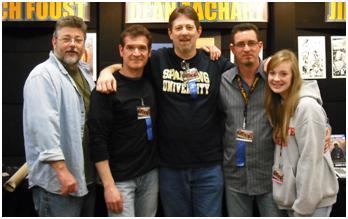 I was seated next to a couple of guys I used to hire during my Malibu days. They happen to be some pretty talented artists, as well. Dean Zachary, Mitch Foust, Jim Hall, all shared a joint booth space and practically didn’t move the entire three days, steadily drawing whatever was requested by fans. And the Star Wars fans were out in droves. They came to see Star Wars comic writer John Jackson Miller, and Kevin J. Anderson, who was the Guest of Honor. Though I’ve known John for some 15+ years, I guess it’s been more peripherally than directly. To my knowledge (and his as well, he claimed), this was the first time I’d met him in person. John was just as nice as I expected, and novelist Anderson—of whom I had no expectations—was equally nice. Anderson sat to my left when he wasn’t on panels.

Some of my new acquaintances were there as well: Imagicopter founder David Blalock was there, but I regrettably didn’t get to speak much with him. Novelist Bryan Davis came for the banquet on Saturday. I spoke with him briefly and met his wife. I even had the chance to try to recruit him a little for Imagicopter (Yes, I’ll blog about that a little later).

I met some other new folks as well. Musician Chris Brown manned Anderson’s table most of the time while Anderson was away. An incredible guitarist, I anticipate he will be performing as the music guest at cons to come in the very near future. Lin Workman has been working in comics for a while, and I find it odd that he’s located so close in Memphis yet I’d never had the opportunity to meet him.

A surprise visit by Mississippi 4H leader (don’t know her official title) Linda Mitchell surprised me a bit. But I tell you, she is always on the lookout for events that her incredibly talented group of 4H kids might like. She and husband Dean were all smiles as they made their way around the convention. It’s highly likely she’ll bring a group of 4H kids there next year…and I suspect they’ll have the time of their lives!

I’d be remiss if I didn’t mention MidSouthCon Committee member Carlin Stuart. Carlin was my liaison and the entire reason I attended and was able to attend. He took good care of me! I’m hoping to hear from Carlin in the coming months with an invitation to do it all again next year!