For the second year in a row, I had the incredible pleasure of mentoring/instructing a very talented group of retreating writers at the Hemingway-Pfeiffer Museum and Education Center in Piggott, Ark. Part of the ASU system, HPMEC has had success with the writer retreats as this past summer was the 7th Annual, and the one just finished was the 2nd Annual Fall Retreat.

But the writers weren’t actually “retreating,” at least not in the military sense. In fact, they were very much advancing, taking full advantage of the beautiful Fall weather on the HPMEC grounds, which features a “barn studio” where Ernest Hemingway penned parts of A Farewell to Arms. Catered to by Deanna Dismukes and the staff, the writers are able to spend the entire week focused on writing, whether that be finishing a project, trying new ideas, or searching for an elusive muse. What a cool idea.

The neat thing is that the writers came from all over the state of Arkansas and Missouri just to spend the week writing. Some of them know each other from other writing groups, some were first timers, and some were even first-time writers. But they were all treated equally.

So what is it we actually do at the retreat? Each morning begins with a writing exercise, something with the intention of loosing up the writing muscles. Writers aren’t required to do the exercises—they can immediately tackle whatever project they want to tackle—but most end up participating in them each day. At lunch the morning exercise work is read, and often (though not every day), an afternoon writing exercise is given. Again, the main purpose is to hopefully inspire creativity for the writers. Those exercises are they read by the writers before the group leaves for the afternoon.

At the end of the week, the writers turn in those exercises along with 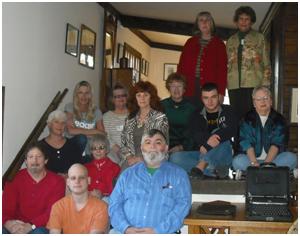 other writings they’ve chosen, and a special Retreat Anthology is created. I’m the lucky owner of two thus far and I’ve enjoyed the works in both. I’m looking forward to receiving the one just created.

The picture was taken in the barn studio—that’s Hemingway’s typewriter (or rather, one of them) in the bottom right of the picture. From L-R; bottom to top: me, Ethan Baker, Bob Jones (looking a little like he’s channeling Hemingway), Wanda Jones (red), Linda Wyss, Monica Moore, Chris Henderson (who’s commented on some of my blog posts in the past), Carol Griffin, Rita Dortch, Joseph Hargrave, Pat Laster, Phyllis Rhodes and Elizabeth Foster.

On Friday, Faye Williams Jones signed copies of her new release: Erasing People. It can be ordered online here! Though tired and ready to get back home, I think many of the writers—like me—hated to see the week come to an end.

Well, the 2009 Clay County Arkansas picnic season is over. Money for local cemeteries has been raised for another year. This means they can continue to keep the grass cut on my final resting place…well, mine and hundreds of others, some of whom are already there.

It also marks Brittany’s third and final performance of the picnic season. Despite several obstacles, she performed splendidly—but you knew she would, didn’t you? In fact, this was actually the first time she’d ever run into any real obstacles for her performances. First, this picnic didn’t have a “sound” person to select the songs or monitor the volume on the sound (which got very loud on one of the songs). So, she had to select the song on the CD, press play, and then hurry back to the center of the stage to sing.

Then she had to deal with a microphone that had a short. Granted, she wasn’t the only one to deal with it during the picnic, but a few times her voice cut in and out while she was singing. You could tell she was fiddling with her grip trying to find the sweet spot—and all the while maintained her smile.

Then she had to continue singing through a train, which just happened to blow its whistle several times as it passed by. The picnic grounds are right beside the railroad tracks, so we got to hear the clanking of the cars as they rumbled by. Fortunately, it was a short train.

She opened the picnic with an a cappella version of Star Spangled Banner. I was supposed to video tape it as I do all the others—as those of you who read here regularly know—so that I could post it on youtube and all over other places. But I managed to mess that up somehow and ended up videotaping the ground for a couple of minutes just after she finished. I may lose my “cameraman” job because of that. Momma was not happy.

She’s not finished singing yet, though. She’s been invited to sing at the Missouri Peach Fair in Campbell, Mo. In August, but more on that later. 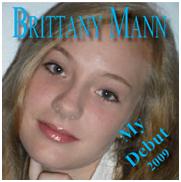 But she was mostly excited about her fundraising project. She has been so excited about Camp Electric she attended this year that she wants to go back. In a very creative fashion, she decided she wanted to sell some CDs of her singing in order to raise money for next year’s camp. So, she picked out 8 songs (started with 10, but that turned out to be too much work for Dad!), we recorded and mixed them, and made a cover for it and she took them with her to sell. Selling for $5 each, she sold fifteen of them. She was very happy. In order to pay for her camp completely, she’s calculated she needs to sell 85 more. So if you know her, she’ll be hitting you up to buy one soon. We will mail them, but Dad has to figure out the postage and mailing costs before we can do that.

All in all, a fun summer. Time for school to start back this week!

BJ and I own cemetery plots in Gravel Hill Cemetery in the NE corner of Arkansas. It’s a nice little spot, on the side of a hill looking north (watching out for Yankees, I tell her). It is beautiful there, but the thing is, it is pretty much out in the middle of nowhere.

Most folks don’t give cemeteries a second thought…until one makes the news like that place in Georgia burying people on top of each other. Either that or when they have to bury someone.

Rural areas have to get creative on how to keep the cemeteries funded so that care can continue to be provided year round. As people continue to migrate off the farms and into the cities, funding for small cemeteries becomes even more vital. In Clay County, Arkansas, many of the local areas have “picnics” annually to raise money for their cemeteries. The ironic thing is that they’re more like small county fairs than picnics. When I hear “picnic,” I picture a bunch of folks sitting around on blankets eating sandwiches, maybe getting together for a friendly game of softball.

The entire day’s events at the picnics in Clay County are designed to raise money for the cemetery association while giving families a convenient way to socialize with one another and with other local families. Auctions and beauty pageants are big draws. Brittany, now 13, participated in the “big girl” beauty pageant this year. She didn’t place, but she said she had a good time and would be interested in doing it again. She also had the opportunity to sing for about 30 minutes. I’ve got one song embedded here.
I’ll try to add others in the coming blogs.

Brett spent the entire day running around with a watergun and playing with the other kids there. Every so often, he’d find my mom and ask for money. She’d feed him a few ones and off he’d go again.

BJ actually hung around for part of the auction…as far as I know, it was the first time she’d seen one at the picnics. They’re different than a “real” auction because the auctioneers generally really ham it up—since the money being raised is for the cemetery association, it ends up being a lot of fun.

I enjoyed the picnic as usual. I went under the guise of helping Dad and Angie run “the bank.” Sure I made a few stops there, but I spent most of the time socializing. I’ll admit, the picnic was good for my ego this year, too. Several folks made a point to find me and tell me that they missed me and my work at the paper. Very kind words. They didn’t have to do that, so I was very appreciative of it. Thanks to the dozen or so of you who said that. I won’t call you by name here—protect the innocent and all that—but your comments were certainly appreciated.

It’s good to see so many people come out and give their time, energy and money for the cemeteries. One day, we won’t be able to do it and we’re going to rely on others to continue taking care of our final resting place. Mine will be on the side of that hill, scattered in among family and family friends.

All the while, watching out for another Yankee invasion!