With kickoff to the new season of football starting…today! (we’re talking college football, ya bums, which is the only football that really matters!) I thought I’d yak about it a bit.

Some years ago—long before the internet and email—I used to receive regular packages from my dad full of newspaper clippings of assorted stories of interest and sports pages. Now, he didn’t just save me all the sports pages, but only the ones that had news about the Arkansas Razorback football team. Back in the pre-internet days, it was very difficult to get news of my favorite team because I was outside the state of Arkansas. In fact, when I was living in California, during football season I’d get a vhs tape around Thursday that had the game from the previous weekend in addition to the sports pages.

I absolutely loved getting those packages. I’d read up the papers, watch the game…and often I’d call dad. This was in the day when you had to pay for your long distance call by the minute, so our football conversations were often brief.

Dad used to send me the summer preview edition of Hawgs Illustrated, which is loaded with roster/player/coaching info to get Razorback fans hyped about the upcoming season…after he was finished. Somewhere along the way—and I don’t remember exactly when—I got a copy in the mail addressed to me! And it was NEW! I called and asked Dad if he’d sent me a copy because I was confused why the publisher was sending me one…and he said he’d ordered me a copy when he ordered his copy. One year my magazine even came with a post-it note attached that said something like “From Dad.”

He’s been doing that every year since.

My happy summer magazine, courtesy of my dad!

And it’s STILL a happy surprise to get the magazine in the mail…mostly because it reminds me that my dad was thinking about me when he ordered his copy.

Yes, you read that right = we’ve finally sold the house. After more than a year on the market, we’re no longer paying for a home we don’t live in! And the timing is perfect—all on God’s time, of course—but we’d reached that point where we just couldn’t scrape the money together for two homes and had paid our last note. I wish I could tell you I was independently wealthy enough to afford a home here and a “Mississippi summer home!” ha. 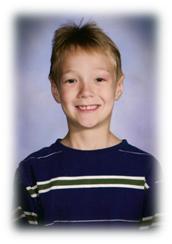 But, all with most new chapters in life, there are positives and negatives moving on. We have a lot of really great memories in the home in Oxford. We were there for five good years: Brittany was in the 7th grade and Brett was 2nd grade when we moved in: Brittany had graduated and Brett was starting 8th by the time we moved. Man…talk about changes (just look at the pictures).

We went there knowing only the person who hired BJ at the University—which is what took us there. We leave with a host of people we know and love (even those who have the misfortune to cheer for the Mississippi school UpNorth)—and it’s really them we’ll miss the most. Fortunately we live in a day and age of Facebook and Twitter and whatever else, so we’re expecting to stay virtually in touch.

We watched the Hogs rise…and then fall in the sports programs, particularly when it came to playing Ole Maid. Heck, prior to moving there, the football team had won 7 of the last 10 games. While we lived there, we only won 2 out of 5 against the mascot-ly confused Black Bears. Many of the other sports were in similar reversals (all but the Track team—which continued to dominate on a national level). I’m hoping now that I’m gone and can’t watch them live, they’ll start winning again!

I started—and finished!—my MFA while there. Was part of a great MFA program at Spalding University and made a lot of very cool writer pals who are doing great writer things today! The novel that was my thesis is making rounds with an agent and I’ve had good comments from those few who’ve read it.

We all witnessed our largest snow ever—a full 10 inches! I know, I know, you folks in the northern climes laugh at that, but for us it was pretty cool (see what I did there?).

Anyway, it’s nice to have closure on the home…and I’m looking forward to the next chapter of memories to create! And, of course, I’ll put a good bunch of them here. As always, thanks for reading.

I was going to talk about plotting for multiple characters this week…but last week I had the opportunity to see my beloved Razorbacks get beat by Florida. Actually, I went thinking the Hogs had a great chance at victory…and if they’d play quarters 2-4 the way they played in the first quarter, then maybe. 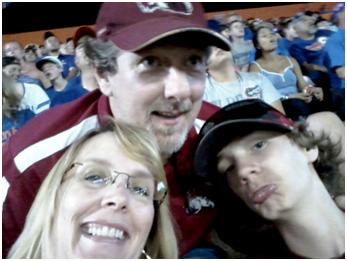 But I’m not here to bemoan that fact—I’m done with that. I am here to say that we came away incredibly impressed by the kindness of Gator fans. The Swamp was about as I expected: it was big. I was, however, surprised to see that there were empty seats. With a team in the top 20, I’d expect to see all 90,000 of the seats filled. It was also very loud. The only things I can think of I’ve personally heard louder were Aerosmith in 1978 and Queen in 1980. I understand how the players can goof up on the field when they can’t hear!

As you can see by the picture, we were surrounded by Gator fans. Brittany isn’t in the picture because school kept her away. The picture was sent to her to show we were missing her. I was a bit concerned when we took our seats because—well, I’ve been to my share of Arkansas-Black Bear games (that’s Ole Miss for the uninitiated) and those are the only games I’ve ever been physically threatened. Yes, I know it’s generally the alcohol speaking, I get that…but it is what it is. We did see a little of that in the pre-game tailgating, even saw a few Hog fans who were humorously displaying their alcohol encouraged Razorback spirit in the form of non-stop hog-calling and high-fiving anyone with a red shirt on. I’m not convinced they made it to half-time, though.

There was one Gator fan about three rows down from us who was indeed alcohol obnoxious. So much so that he almost got into a fistfight, not with a Razorback fan, but with another Gator fan. Yeah, he was THAT obnoxious. Security finally came and removed him and his buddies—and much applause was heard around us. We even had Gator fans apologize to us for his actions. The others around us were sincerely kind; they asked us where we were from, wished us safe travels, said good things about our team (even though we were getting beat), and just all around general niceness.

Yeah, I was impressed.

I’ve not been to that many “away” games for the Razorbacks: Auburn, Miss. State, Ole Maid, Vandy and now Florida. I hesitate to rank them, but Florida and Auburn were both great experiences meeting some very nice “opposition” fans. I’ve never been to Death Valley (LSU), but I’ve heard horror stories about the place.

Their kindness made for a very nice Saturday…and eased the pain of losing…some.