While I’ve been to dozens of writers conferences in the past, this is the first time for me to attend the Florida Writers Conference. Had it not been so local, I’m not sure I would have attended this year.

But I’m glad I did. Of course, I have my Full Sail colleague Jennie Jarvis to thank for that. 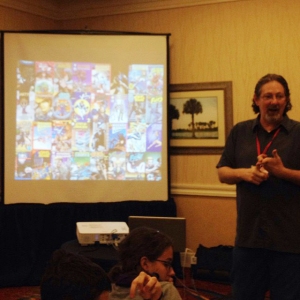 Wow, but what a cool conference. It’s already clear to me that many of the attendees there feel and think of each other as family as many of the conversations I heard sounded like those from a family reunion. There were tears shed for those who were no longer able to join the conference or who had passed on. I didn’t know them, of course, but you could tell by the shared emotions of the group that they were talking about a family member.

It’s the kind of group that you want to be a part of because writers are an odd sort. And I mean that in the most affectionate way. They’re (and when I say “they,” they includes me) just weird and nobody understands them but other writers. It’s just the way it is.

I made new friends and some potentially cool contacts as well (maybe they’re both and the same, who knows?). I even discovered there are a few writers groups nearby—and they quickly invited me to be a part of the group.

I spoke twice on writing comics, once to the main part of the conference and the other time to the young writers conference. The young writers asked some pretty cool questions, too! The good news (for me, that is) is that portion seemed to go over well and I’m already talking with them about next year! Yes, that’s very exciting to me.

I also sat on a transmedia panel with some talented folks (including my Full Sail colleagues Julie Anne Wight, Dr. Tof Eklund moderated by the talented Allen Gorney!) where we talked about taking stories to different formats. It’s cool to hear so much interest in graphic novels.

On a more writing related note, got the first rejection to the C&M reboot. Sigh. Shall soldier on. Nothing more on BEAH, but am about to lick the stamp for CITIZENS. Cross your fingers!