Arlington house, the former home of American hero Robert E. Lee behind us.

On my recent getaway to DC, we took an entire day to visit Arlington Cemetery.  Arlington is one of the places I’ve always been interested in visiting since I learned it’s history and connection to American hero, General R.E. Lee, so many years ago.

I realize what I say might make some of you unhappy, but I was really disappointed in the whole thing.

First, Lee’s home was closed for renovation and they don’t expect it to be re-opened until late 2019 or 2020. Honestly, the home is the main reason I’ve always wanted to go. They tell you that you can still walk the grounds of the home, but it is surrounded by a tall fence with a sort of curtain (you can see what I mean by the picture) – so you can’t really even see the house while you’re up next to it. You can see it from a distance at many places around the park – but it’s not the same.

Me at some amphitheater near the Tomb of the Unknown Soldier

I know I’m supposed to tell you how awesome the JFK Memorial is, but…eh, It was a slab of rock and a flame. I was not impressed in the least.

We took the bus tour – which I can’t say I recommend. Oh, it was nice not to be walking around the entire thing and UP the hills, but we whizzed through most of the grounds just getting from one stop to the next. Out of the 400,000-ish tombstones at Arlington, they mentioned only about 10 “in passing,” and about 8 of them were “First African American” this or “first woman” that, that is seemed like such a blatant attempt – to me – to ignore any others of note that weren’t either women or black. One memorial (I assume it was a white guy, but I don’t know who it was) was mentioned twice simply so the tour guide could mention that the person in question thought Lee was a traitor. And yes, he really did make a point to say it twice. Why? What was the point of that?

Thought we might drop in and catch a bite to eat with Trump…yeah, they still wouldn’t let us.

The highlight probably will not surprise you. It was, of course, the changing of the guard at the Tomb of the Unknown Soldier. It is pretty somber to watch the guard march back and forth, guarding the tomb. The attention to detail by the soldiers in the ceremony is pretty incredible. It made the entire trip to the park worth it, and I highly recommend you stay for the ceremony if you get to visit the cemetery.

Even though I was overall disappointed, I’m still glad I went because it was one of the things I’ve always wanted to do.

And now I have…thanks to my wife. 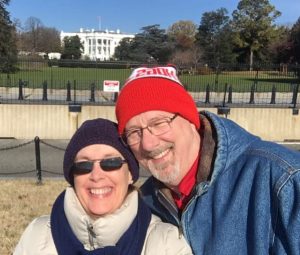 Me & wifey at Trump’s house…he wasn’t home…well, they wouldn’t let us see him, anyway…

The wife surprised me with a trip to Washington, DC. Seems she thought I really needed to get away (see my recent blog post about my high BP – which is slowly improving, thanks) and so she whisked me away.

We wanted to catch the main things on day 1. She got us a hotel close to all the sites, so we got a lot of walking in. First place we headed was Trump’s house! We were surprised to find the main road in front all blocked off. You could still see the house, but it wasn’t like I’d always seen in pictures.

Trump wasn’t home, so we made our way around back were we learned we’d only just missed the Christmas Tree lighting by the First Lady the night before (we were likely in the shuttle on the way to the hotel). They were still taking the stands d  own from the night before so we decided to come back and visit when it was dark.

Me & wifey at the WW2 Memorial, Washington Mon in the distance.

We made our way to the Washington Monument but couldn’t get close as they were doing repairs. Seems Spiderman had gone at it against the Vulture or some such. We got a good look from just outside the fences though.

We made our way over to the WW2 Memorial and it was very cool. It is right beside the Reflecting Pool that leads to the Lincoln Memorial, so we walked along the pool a bit before heading over to the Smithsonian for American History.

I had no idea they were free to enter. I entered the front door fully expecting to pay an admission of some sort… but it’s FREE! We were there several hours–honestly I lost track of time so I’m not sure how long…but regardless, we didn’t get to see all of it. 😦

Needless to say, I enjoyed the heck out of it! We we were worn out. WE got in 16k steps that day for those keeping track.

The next day we spent the entire time at Arlington. It’ll write about it separately–in part 2, because Lee’s former home deserves an entire entry! 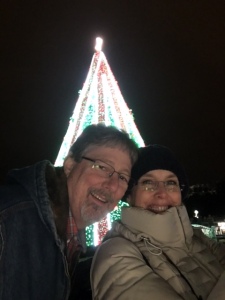 Trump’s tree was big…so big…it’s the biggest tree I’ve ever seen. So big.

We also made it back to the White House at night and the street in front was open so we got to get closer than before. We also got to see the tree at night. The base has several model trains – which, of course, I really enjoyed. Another cool thing is that there are 50 trees around the tree, one for every state. The ornaments on the trees all come from a middle school class in the respective state. Pretty cool.

All in all, a fun little get away planned by wifey!

2019 convention schedule and some other tidbits

Yes, I realize I’m a little late with this, but better late that never!
2019 is shaping up to be another fun convention year. I was already a guest at the DeLand (FL) Comic Convention. My long-time pal Steven Butler made the trip down with his budding artist daughter, Lily, and we had a great time.
If I can get the picture to embed, here’s one of me and writer John Crowther.

There’s a good chance I’ll return to Pikeville, KY in early August this year, but still working out the details.

I’ve reached out to Raleigh Supercon and to HeroesCon…but unfortunately have received no responses from them Would love to get to both places as I’ve never been to either. Obviously, if I ever hear back, I’ll update you here. So it goes…

Waiting on Dean for C&M #2. He went and did some silly thing like get married! I think he’s getting back in the groove, so hopefully we’ll be able to kickstart #2 before long.

Been working with artist Alan McMillian on a graphic novel we’re calling SPECK. Both of us are getting out of the comfort zone a little in the way we’re doing things and what we’ve planning…but it’s turning in to a lot of fun. As we get more done, I’ll keep you posted…but it’s pretty exciting!

I’m talking to several other artists…but nothing that I can really show or talk about yet. As soon as it–or anything–happens, you’ll be the first to know!