The Name of the Wind by Patrick Rothfuss

This is the second book I’ve read on recommendation by a good friend in the span of just a few months. So shout out to my old college roommate Keith Jones (Or, Kieth, if you prefer). His recommendation was seconded by my other old roommate, Tim Miller.

I was a little hesitant about the book at first because I know that Keith and Tim both lean more to the fantasy than I do as I tend to lean toward the hard sci-fi. But, in all the years I’ve known them to talk about books they have enjoyed, they’ve never suggested one of them to me. Comics=yes, books=no. And, as I was looking for something to read on my new Kindle (thanks Mom and Dad!), it seemed like the perfect choice. 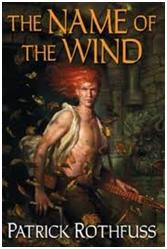 My first complaint probably had more to do with the Kindle than Rothfuss; every time I tried to view a larger image of the cover, it immediately faded and went to the inside elements. No choice ever brought it back up to the top…and I wanted to look at it—I like sci-fi art! Had I been able to get a better look at it, I would have noticed the main character had RED hair and wouldn’t have found that a surprise a couple chapters into the book when a character mentioned it!

The second issue I had was that it was a slow start. The weird thing is that as much as all the current internet scuttlebutt on writing is that you start your story immediately and don’t take so long to get to the story, that doesn’t seem to be true to the successfully published books. I’ve got no answer for that one. Sorry.

After several slow starts, the main character starts telling a story about himself because he’s supposed to be some person of legendary exploits…currently running a bed and breakfast inn. Okay. His story begins with him as a young child because he insists it must start there…four chapters into the book and it turns in to a YA title! Who’da thunk? Except that we know that there is no actual danger of younger self surviving his trials (he’s narrating as an adult—duh!), the story is actually very good. It’s only then that the book becomes a can’t-put-it-down kind of tale. And I couldn’t put it down. The writing flows well and is easy to read, pulling you along in Kvothe’s (the main character) tragic childhood story.

There’s not a lot I can say that aren’t in the form of spoilers. Kvothe is from a family of traveling actors, a sort of band of gypsies. As a youngster, he finds himself in University, the only real place for learning in this sci-fi world. Because of his youth and lack of wealth, we follow his struggles to stay in school, learn magic, play music, and fend off the rich bully…and to get the girl of his dreams.

And then—it pulled the clincher on me: the book ended, but the story was far from done! What? I did not realize that it was part of a trilogy when I began reading. The kindle version did not indicate it was Book 1 or part 1 or whatever. As much as I liked the book and would recommend it to you, I do so only with the understanding that you know it’s continued. It didn’t really resolve itself that well, either, certainly not like a Lord of The Rings—which seems to be the benchmark for all trilogies, now, right? I’d prefer to see publishers/writers follow the Asimov/Foundation model in telling a self-contained story in one book…then another self-contained story that happens to be part of the larger picture in the next.

Do I recommend the book? Yes. It was an enjoyable read…just know you’ll have to seek out the book(?)s that follow for complete reading satisfaction.

3 responses to “The Name of the Wind by Patrick Rothfuss”

This site uses Akismet to reduce spam. Learn how your comment data is processed.